This article first appeared on Quartz.

In June 2016, Sophie (name changed) quit her job in the suburbs of Fort Worth, Texas to sell for LuLaRoe, a rapidly growing clothing company that offers self-employment opportunities to American women in the form of hawking hyper-hued apparel. LuLaRoe’s consultants told her—and tens of thousands of other mostly rural and suburban women over the past five years—that she could provide for her family, join a sisterhood of supportive women, and find meaning in her life again through the conduit of colorful, stretchy fashion—all for a reasonable upfront investment of around $5,000.

As economic opportunity has become more concentrated in urban areasin the US, rural communities have fallen behind. Residents of towns like Casper (Wyoming), Spring Creek (Nevada), and DeRidder (Louisiana) all missed out on economic recovery following the 2007 global financial crisis. Bootstrapping, hard-working families in these regions are urgently searching for a way to regain their economic liberty, along with their dignity.

Fed the fantasy of achieving the all-elusive American dream, many of them are being wooed by multilevel-marketing companies. Known as MLMs (or “direct-sales”), the current US administration is stocked with their cheerleaders: Betsy DeVos, the secretary of education, is married to a cofounder of Amway; Ben Carson is a spokesperson for a vitamin MLM called Mannatech; and president Donald Trump used to have an MLM, Trump Network, and was a spokesperson for another.

MLMs aren’t a new business model—they’ve just done a little rebranding. A lot of the old guard such as Avon and Mary Kay are still around, but nowadays, some of the most popular MLMs include Herbalife and Plexus (nutrition and weight loss), Young Living and DoTerra (essential oils), Pampered Chef (kitchen tools), Rodan + Fields (skincare), and Jamberry (nail stickers).

Of these second-wave MLMs masquerading as women’s empowerment, LuLaRoe is queen. More than 80,000 women have paid around $5,000 for several boxes of low-cost clothing and worked as much as 80-hour weeks to outfit hundreds of thousands of suburban women in multicolored polyester. But according to a report that studied the business models of 350 MLMs, published on the Federal Trade Commission’s website, 99% of people who join multilevel-marketing companies lose money. Depending on how you look at it, it’s either a brilliant business model or a predatory practice—or a little bit of both.

How do MLMs work?

MLMs sell themselves using self-empowerment language and sparkly beauty products. They’re #girlboss mythology repacked for Christians and Mormons; entrepreneurialism for women brought up believing men should be the breadwinners; and a peppy dream for millennials who were told they could do anything.

MLMs sell themselves using self-empowerment language and sparkly beauty products. MLMs only sell through a network of consultants, not in online stores or in brick-and-mortar shops. Sellers buy inventory from a parent company and sell it to their friends and family, keeping the profit for themselves like a franchise would. But the real potential to earn money generally isn’t in peddling wares: It’s in building up a team of sellers below you and getting a cut of their commissions. Once a seller has recruited new consultants, she has to push them to buy more inventory each month or to hit consumer-sales targets in order to earn her bonus check and keep the money flowing upstream. This means the further down the recruitment ladder you are, the less opportunity there is to make real money.

The difference between a MLM and a pyramid scheme can be blurry, both legally and practically. It’s never been legally defined in the US by a statute, but the FTC defines it as whether a consultant can make an income by selling to the public alone without having to recruit consultants underneath them. “Not all multilevel marketing plans are legitimate,” the FTC states in its literature on MLMs. “If the money you make is based on your sales to the public, it may be a legitimate multilevel marketing plan. If the money you make is based on the number of people you recruit and your sales to them, it’s probably not. It could be a pyramid scheme. Pyramid schemes are illegal, and the vast majority of participants lose money.”

“The majority of [retailers] earn income from only selling LuLaRoe clothing and not through participation in the Leadership Bonus Plan,” says a LuLaRoe spokesperson of their recruitment-based bonus structure. “LuLaRoe’s success is based on [retailers] selling the comfortable and stylish clothing to consumers, not ordering more inventory.” LuLaRoe says that in 2016, 72.63% of their consultants earned their income through selling clothing alone.

LuLaRoe also says it invests “considerable time, resources, and talent” to support its “independent retailers,” as it calls its consultants. If they experience financial or psychological hardship through operating their businesses, it says it’s not the company’s fault. “Retail is not for everyone,” says a LuLaRoe spokesperson. “Retailers own their own business and make their own decisions…The success of any business depends on its leader’s own respective and independent business goals, and the strategies they employ to achieve those goals.”

However, MLMs are nearly never the get-rich-quick plots their advocates promise. “The number of people who actually succeed at that is very small,” says Douglas M. Brooks, an attorney who represents victims of pyramid schemes. “And some do—people will get up on stage and wave checks around, but they represent a fraction of 1%.”

One such success story is Nicole Haas of Williamsburg, Virginia. A bubbly blonde and former personal trainer, she put $12,000 on a low-interest credit card to start her LuLaRoe business in January 2017. Through working 25 to 30 hours a week, she paid off her credit card in May and now puts $3,000 a month in her family’s account, less taxes. “It’s changed my life,” she says. “It’s changed who I am as a person.”

According to the Direct Selling Organization, she’s one of more than 20 million Americans who participated in direct sales in 2016. It’s a booming business, racking up an estimated $35 billion that year, a 30% increase from 2010. You might have been roped in yourself and not even realized it: If you’ve ever received a perky Facebook message from an old friend inviting you to a party at her house, had a cousin say she has a business opportunity that could help you take control of your life, or been handed a colorful business card outside of Target by a woman spilling with compliments, you might have been charmed by an MLM seller. 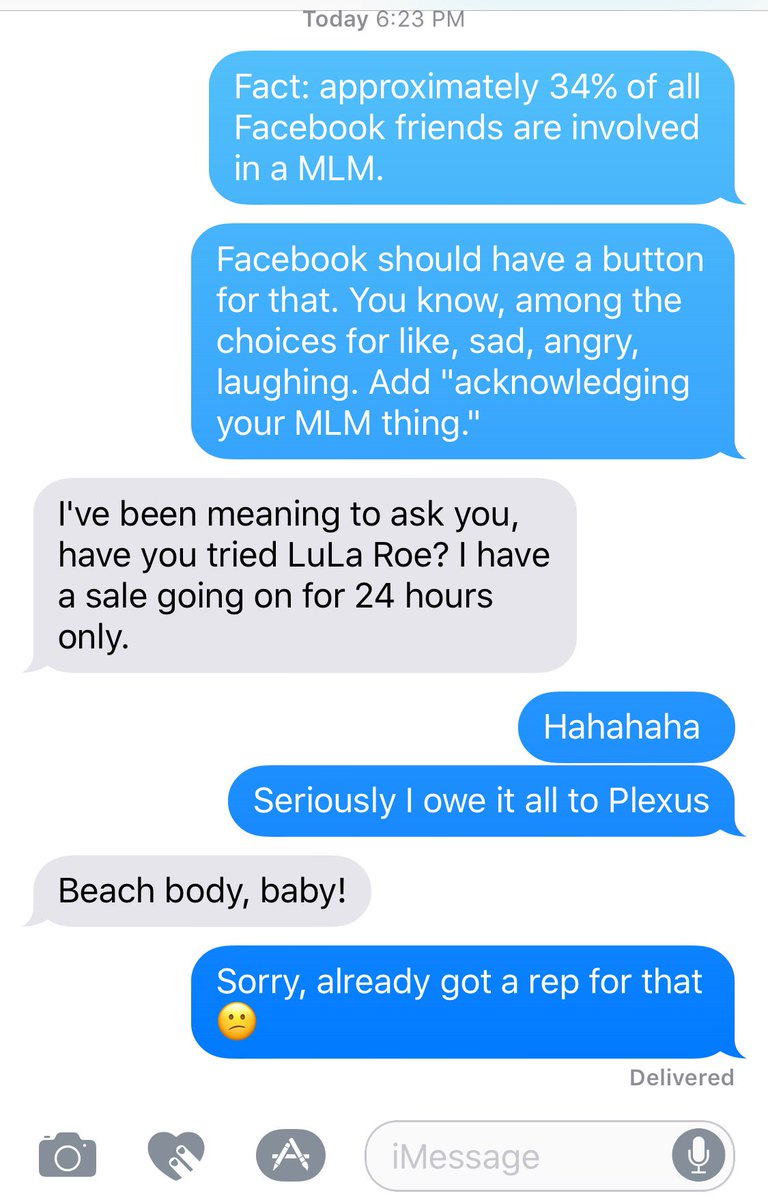 MLMs disproportionately flourish in suburban and rural America: According to LuLaRoe’s retailer map, it only has 10 consultants in all of Manhattan, which has a population of 1.64 million. By comparison, Pueblo (Colorado) has the same amount for its population of 110,000, St. George (Utah) has 12 sellers to its 82,000 residents, and Idaho Falls (Idaho) and Casper (Wyoming) both have nine sellers servicing each’s 60,000 citizens. In 2016, the US Census Bureau stated that the median rural household income is 4% lower than it is for urban families, and income inequality is also higher. Job growth in metropolitan areas has far outpaced that in rural areas since 2008, and the job market in these regions has shrunk 4.26% in the same time.

More on next page…

What My Mother Never Told Me (Because I Didn’t Ask)

Couple With Inadequate IQ Scores Get Children Taken Into Custody